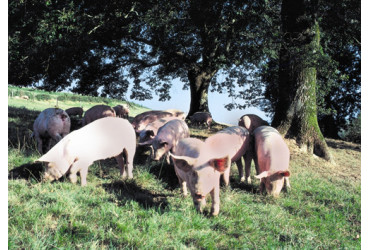 Pork is part of the historical tradition of the farms of the Grand Sud-Ouest. From time immemorial in the countryside, the pig festival has been the nourishing high mass of the year. This tradition offered fresh meat and especially cold cuts that families ate during the year. Pig breeding and especially pork processing helped the farmers to get through the difficult days without starvation. The introduction of maize in the 12th century in our region was a real revolution: the "milhoc" took the place of cereal residues in the feed of pigs but also of poultry and fat palmipeds.

In the south-west, all production conditions are duly codified. The animals roam freely on extensive grassy pastures where their density is limited. Respectful of the environment, this method of breeding avoids any stress for the Farm Pigs of the South-West and allows them to benefit from a life marked by hardiness which is no stranger to the quality of the finished product. The pigs' diet is 100% natural. It is mainly composed of corn as well as barley and wheat. The partners in the chain, breeders, feed manufacturers, transporters, slaughterers, cutters and distributors pay particular attention to maintaining full traceability throughout the various stages of production.

The Label Rouge obtained in 1988 provides the consumer with every guarantee as to the strict respect of a specification which precisely codifies all the stages of production up to the sale of the final product. In 2013, the South West Pork officially obtains its Protected Geographical Indication (IGP).

At OROCBAT, we source only South-West Pork Farmers' Pork to offer you various products, such as those presented below, to be tasted without moderation!