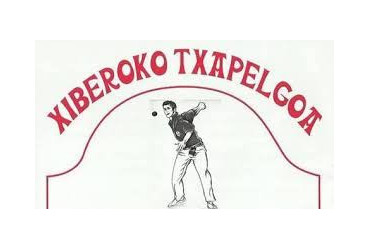 Let's remind ourselves of the history ...

In the 18th century, the long palm was played outside, especially by the common people, probably with the Bare Hand (Bote Luzea) and with leather gloves (Mahai jokoa, Laxua). The short palm was played inside a "jeu de paume" room by kings and nobility, in opposition to the long palm.

So in the 16th century, the place where the short palm was played with bare hands, with gloves, racks and then rackets, was given the name of "tripots" which it kept until the 18th century. There were many "tripots" in France but also in a large part of Europe, where large amounts of money were played.
Then their access was forbidden, except for the nobility; as the fashion passed, the gambling dens were transformed, destroyed and the Revolution dealt a decisive blow to this game. But the games of paume had time to develop throughout France and also in the Basque Country.

The Basque people adapted very well to the ball games they inherited from the past, and while they disappeared in almost all countries, the Basques continued and over time they adapted and perfected the palm games in trinquet to practice "their pelota". The Basques play with a leather glove and a large ball, the Pasaka.
Then, around 1800, the commercialisation of rubber brought an important evolution for the pelota. In addition, the players played against walls, the blaid or indirect games appeared. Leather gloves were replaced by the Xistera (wicker glove), which was lighter and easier to handle for pelota.

During the war, some women played pelota with the men. It was not until 1975 that the first federal women's tournament was organised.
In the old days, pelota was only played as a challenge.

And you, have you tried this ball game?

In Mauléon, the programme for this 21st August is :

5pm (2nd series): Negueloua X and Lafitte G against the winners of the 8th.
6pm (1st series): Aguerre D and Unchauspe A against Etchemendy M and Maitia B (2020 French champions)